A perspective from Pat Tiernan ’95

During my second semester at Saints, I met a teacher who would alter the direction of my life. Anxious but eager, I remember walking into my religion classroom in Sheehan Hall after lunch where you could feel the collective angst among my classmates. A medium-built older gentleman walked briskly into the room toward the teacher’s desk where he rested his briefcase, adjusted his black-rimmed glasses for a moment, and turned toward the class saying, “This is Old Testament. My name is Mr. Vignol. You may have heard some rumors about me—they’re all true.” And with that, I was hooked. It was the spring of ’92.

Over the course of the next four years, John would stand out for me as an academic tour de force. He didn’t just light a spark; he ignited an inferno. His passion for modeling the ideals of Catholicism, biblical storytelling, and devotion to the craft of education transcended the classroom. He taught me scripture and philosophy but also served as my academic league/decathlon coach. I also attended his wedding to Johanna Knutson (my drama coach and English teacher for several years at Saints) and can fondly remember many discussions about faith and life in general.

John did more than just throw down the intellectual gauntlet in front of a nervous freshmen from Poway. He cared for my education by never expecting less than what I was capable of achieving. Satisfactory is quite possibly the only word absent from John’s lexicon. It was his dedication that motivated my own studies in theology and philosophy and has led me to a successful teaching career. To this day, he remains a close friend and trusted colleague in the enterprise of Catholic education. It is for all of these reasons that I am privileged to announce the establishment of the John Vignol Endowment Scholarship. 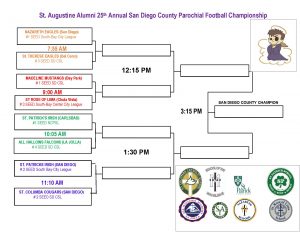 Come out and watch the top parochial football teams in San Diego county battle for the championship. Food and Beverages will be available all day
View Calendar
Add