This year’s 19th Annual Alumni Bocce Ball Tournament featured a turnout of friends old and new, good food & drink, and ultimately a great day of bocce that featured a compelling championship match. Saints alums spanning across some six decades gathered together on the lower field in teams and parings to compete for the Viking-Helmet trophy awarded to the winners each year.

“Team Nate” consisting of 2011 tournament champion Nate Stender ’02 and new teammate Nate Enriquez ’02 dominated the field in the early portion of the day, earning the number one seed in the playoffs with nary a close game on their schedule. Amazingly, Nate Enriquez was summoned to battle just two days before the tournament this year and he proved to be a clutch performer as his inexperience with the game of bocce perhaps emboldened him to attempt and ultimately execute a number of high risk/high reward throws throughout the day.

Waiting for them on the opposite side of the playoff bracket were the battle-tested and 2012 defending champions Greg Croff ’99 and Teresa Poole. With Greg and his brother Brent ’98 winning back to back bocce titles in 2008 & 2009 expectations remained very high for his team. Ultimately the matchup everyone wanted to see materialized in the finals and the good-natured trash-talk and steely resolve reflective of both teams was firmly on display. After jumping out to an early lead and seeing a flurry of points put together by Greg and Teresa, “Team Nate” prevailed with a 15-10 victory in the finals.  Said Nate Stender reflecting on the day and his second championship in three years “I’d like to first thank the alumni association for putting on such a great event each and every year. It’s great to see Saintsmen of all ages getting together to reconnect and have some friendly competition.  I’ll be back to defend the title next year and am looking forward to the Alumni 3-on-3 Basketball Tournament in December”. 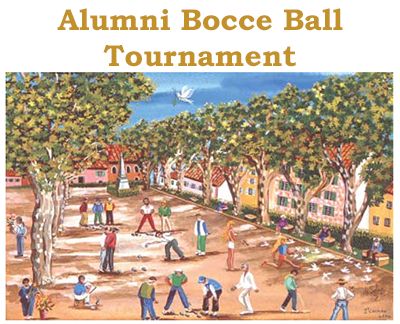